The shafts for each of the former mines are located 3,600 feet apart and the exploration hypothesis is that the two mines shared mineralized systems that may in part be contiguous. Surface mapping and geophysical surveying by the Company support this initial hypothesis and may indicate extension of the vein system farther east along strike from the St. Lawrence mine.

Frederick PEC acquired its interest in the Project from Peloton Minerals Corporation (“Peloton”) (CSE Symbol: PMC) (OTCQB Symbol: PMCFF) through Peloton’s wholly-owned subsidiary SBSL Subsidiary Corporation (“SBSL”) pursuant to an Exploration Agreement with a joint Venture Option (the “Peloton-Frederick Agreement”). Under the Peloton-Frederick Agreement, Frederick PEC may earn up to a 75% interest in the Project by spending a total of US$2,000,000 in exploration expenditures within six years and make annual option payments.

Frederick PEC may first earn a 51% interest in the Project by making annual US$10,000 option payments to SBSL and spending US$1,000,000 in exploration expenditures within four years with a minimum of $200,000 in expenditure during the first two years. Frederick PEC may earn a further 24% interest (the “Second Earn-In Option”) in the Project by then making annual US$25,000 option payments and spending an additional US$1,000,000 in exploration expenditures over a two-year period following the establishment of the first 51% interest, for a total of US$2,000,000 to earn a 75% interest. After Frederick PEC has earned either a 51% or a 75% interest, as the case may be, a mining venture or mining company may be formed with respect to the Project, and Frederick PEC and Peloton will contribute their respective share of further exploration and development expenditures. In the event that either party’s interest is diluted to ten percent (10.0%) or less, it shall relinquish its interest to the other party, in return for a royalty agreement that conveys to the diluting party a royalty of one percent (1.0%) of net smelter returns on all minerals thereafter produced and removed from the Project. The non-diluting party may, at any time, buy-down that royalty by one-half percent (0.05%), so that the total royalty is one-half percent (0.05%) of net smelter returns, by paying US$250,000 to the royalty holder. The Project is subject to an earlier outstanding 2% NSR, the majority of which can be bought down to one percent (1%), and a buy down option on the remaining claims is being sought.

Nine (9) vein intercepts were encountered ranging from 0.21 meters in core width to 2.8 meters
and an average thickness of 1.17 meters.

The 34.4 g/T Au intercept was encountered 40 meters down the dip of the veins from the 150
Level of the old workings demonstrating both the potential for grade and the potential at depth.

The 34.4 g/T Au intercept was encountered at the western limit of the 2019 drill pattern and
should be tested for the potential of a high-grade ore shoot based on that drill result and recent
geologic mapping.

An untested mineralized fault zone east of the mine was identified through geologic mapping and is coincident with the strongest VLF geophysical response on the property. This is a high priority drill target.

Drilling in 2019 tested only 150 meters of the approximately 1,100 meters of known strike length along the SBSL vein system. Additional geologic mapping, surface sampling and drilling is
recommended along the undrilled sections of the veins.

Several of the holes, including SL 19-4C and SL 19-12C below) intercepted additional veins that
do not appear to correlate with the two veins in the historical workings, opening the possibility of
a multiple-vein system. 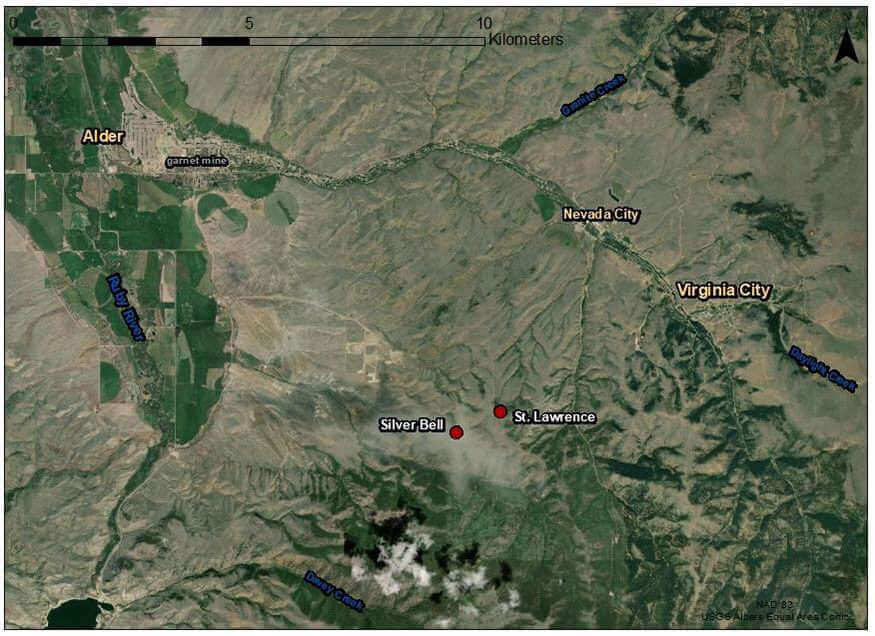 On April 26, 2019, AFR NuVenture Resources   [TSXV: AFR] announced that we have entered into an agreement whereby the Company may acquire a majority interest in the Silver Bell – St. Lawrence Gold Project, in the Virginia City Mining District of Montana, U.S.A. from Frederick Private Equity Corporation (“Frederick PEC”). Under the Agreement, AFR may initially earn a 51% interest in the Project by making annual US$10,000 option payments and spending US$1,000,000 in exploration expenditures within four years with a minimum of $200,000 in expenditures during the first year.

The Project comprises a 390-acre claim package located about 4 miles southwest of Virginia City in Madison County, Montana, and about 50 miles southeast of Butte, Montana. There is also an area of interest around the Project. 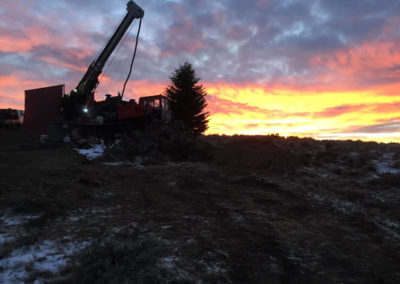 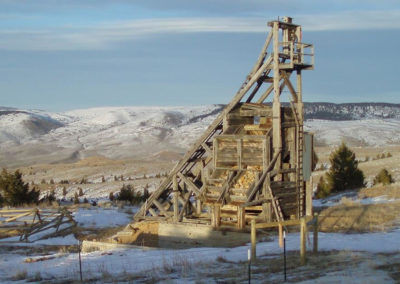 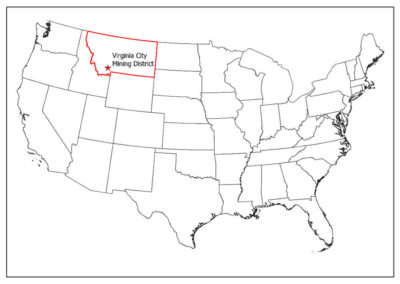 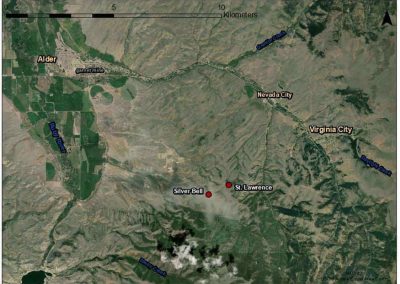 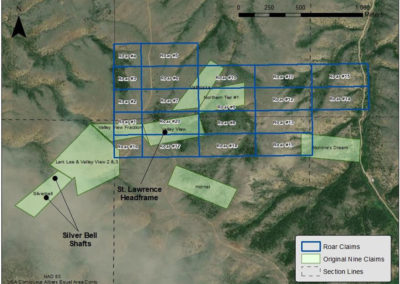 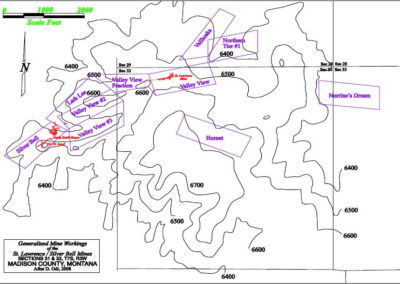 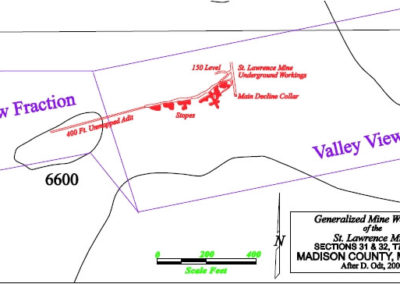 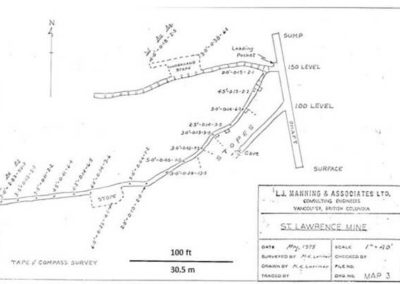 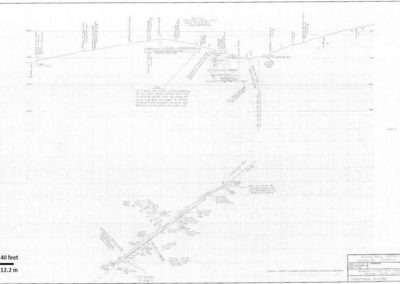 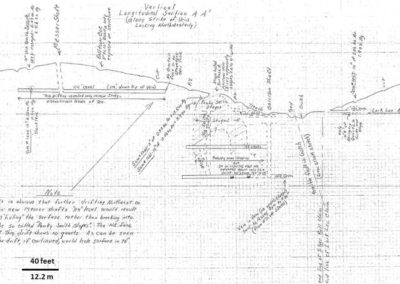 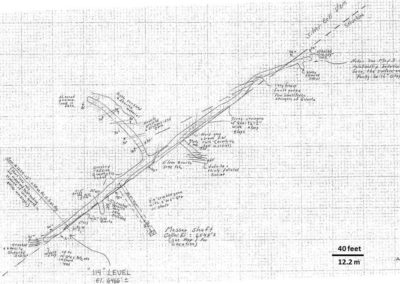 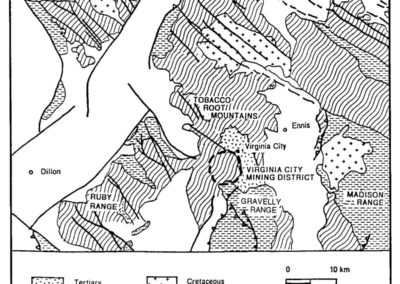 AFR Provides Updates on IP and Mag Survey and Website